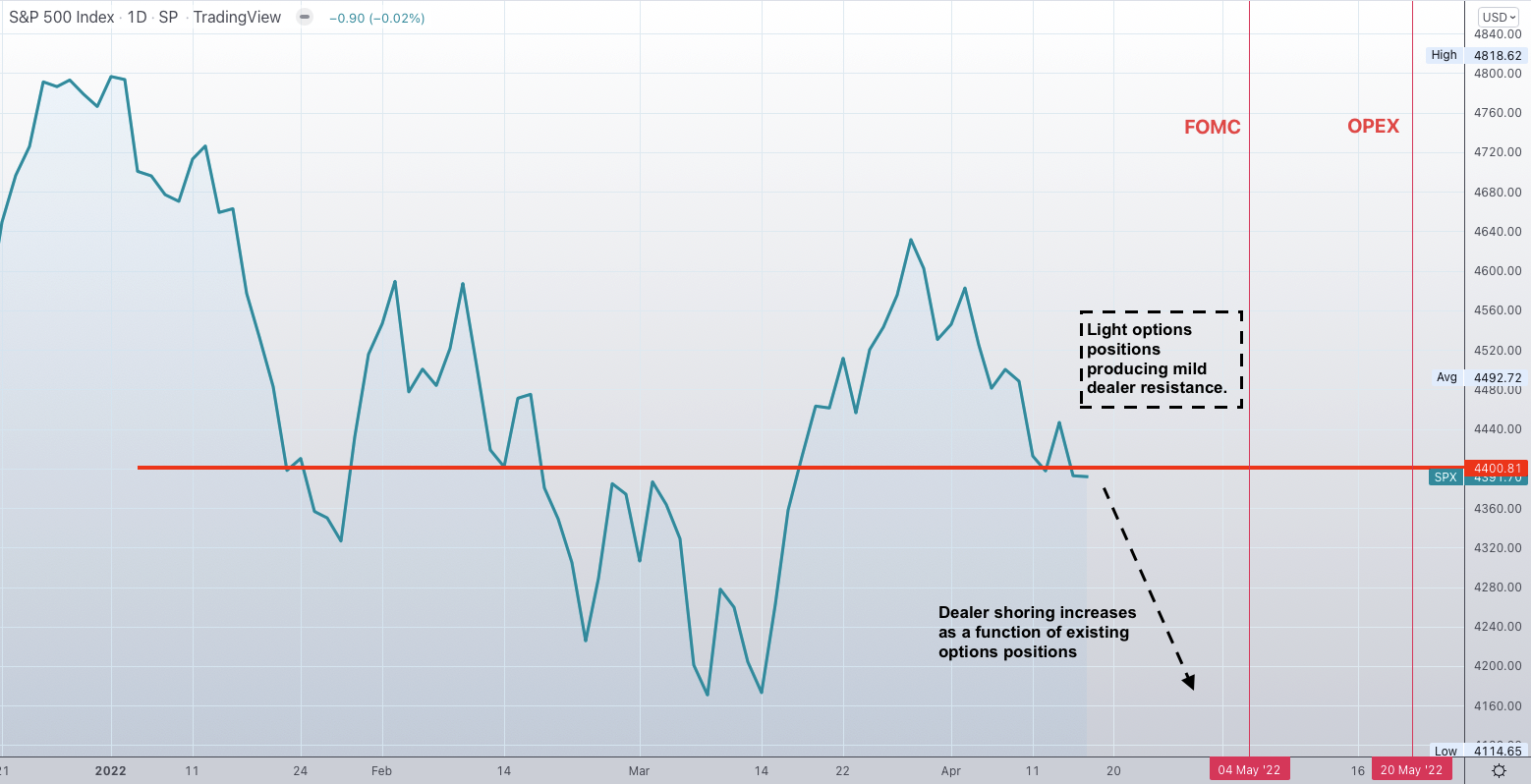 In yesterdays AM analysis, we presented the chart below, noting “light options positions” above >=4450. Because of the light options positioning, we felt dealers would not need to buy on a rally. The caveat to this was in if implied volatility was destroyed, which is what took place yesterday. If implied volatility is crushed, dealers need to buy futures (i.e. the vanna trade). In the last 24 hours the VIX declined 3.8pts (~15%!), with VIX expiration seemingly the only catalyst.

Shown here is activity for 4/20 expiration in the VIX. You can see that most of the at-the-money interest is in VIX puts (top chart, red bars), with the 21 puts being particularly active yesterday (bottom, red bars). Note how below 20 open interest drops significantly, suggesting there is little from a positioning standpoint to push VIX below 20 (VIX hedging or other flows).

To a similar point, yesterdays flow is the SPY/QQQ was concentrated in very short dated options. SPY 445 calls were particularly active, and are now a prominent feature of the gamma distribution (below). Note the light grey shaded area, which indicates a lot of the current ATM gamma will disappear with todays OPEX. In fact, nearly 20% of total S&P gamma expires today, which is a bit odd for a mid-week OPEX. This interesting aberration seems to sync with the crushing of implied volatility (i.e. VIX).

The point here is that we view yesterdays rally as driven by VIX OPEX positioning. Regardless, the VIX at 20 suggests traders are looking for 1.2% daily S&P moves, which is just slightly above our SG implied moves (1.12%). In other words, options implied volatility has now reached a fair value point based purely on price action. One could argue that implied volatility/VIX should hold something of a premium due to the current fiscal/monetary/geopolitical risk(s).

Further, as per the S&P500 chart shown at the top, the market still exists in a void of sorts, particularly with the large SPX/SPY OPEX’s today (OPEX removes at-the-money positions). We see 4500 (SPX Call Wall) as significant overhead resistance, and also feel that a drop back into this “void” to 4400 can happen quickly.

In simpler terms, we view yesterdays rally as technically driven by very short term flow. Mean reversion back into 4400 is quite possible, and we give edge to that scenario as VIX exp & todays S&P OPEX removes positions.

A break over 4500 would render this view invalid, as dealer hedging flow becomes supportive of market prices.