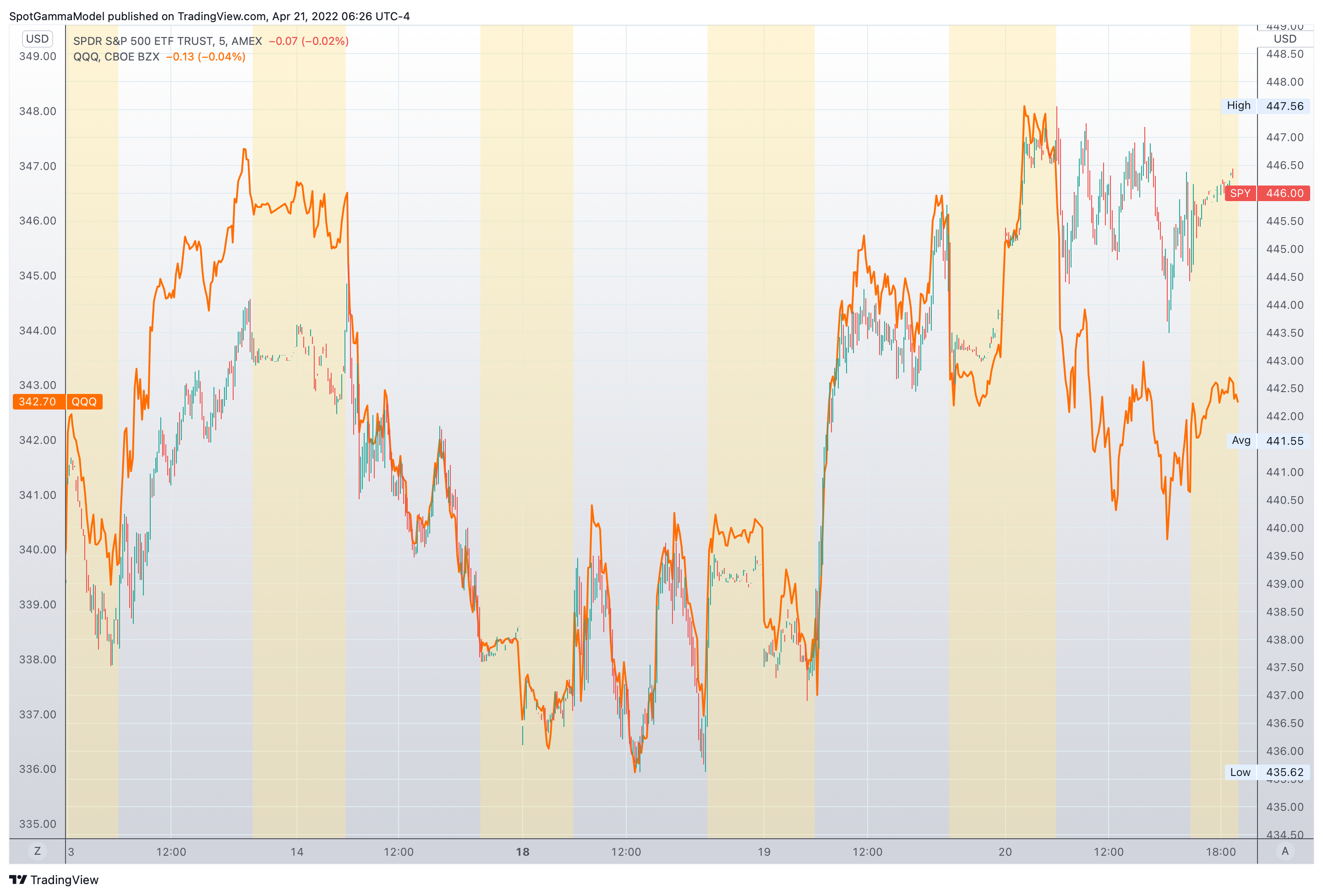 It has been an interesting few sessions. Yesterday we gave edge to a retreat in market prices, as we thought the catalyst was driven by very short term trading linked to the VIX expiration. The S&P closed down a modest (-0.07%). There was obviously quite a divergence in the QQQ (-1.46%), which was hit hard by NFLX and a variety of similar stocks down in sympathy. One has to respect the price action of the S&P, which is likely bolstered by TSLA +7% pre-market.

With yesterdays chunky S&P expiration we saw a shift higher in key levels, namely the Zero Gamma (4522) & Call Wall (4700). This appears to be driven from losing near term at-the-money calls and replacing them with slightly longer term out-of-the-money. This leads to a distinct “flattening” of the SPX gamma curve, as you can see below. Yesterday (left) there was roughly $400mm of SPX gamma near 4500, but today (right) the SPX would need to trade up near 4700 to find an equivalent notional. This pattern is also evident in SPY/QQQ (charts here).

What this is suggesting is that the positions that were supplying positive gamma all jumped from 4450-4500 to >4500. This is something we generally see around large monthly OPEX (i.e. 3rd Friday) and not during mid week, however yesterdays OPEX was fairly material (again, we think related to VIX exp). We think there are a fair amount of tactical longer term put hedges being held, and traders are/were aggressively short term calls, which were closed/rolled higher. Less positive gamma also infers higher volatility/less resistance above 4500 as there is less hedging needed by dealers (ie shorting into rallies).

Further, both the S&P/QQQ vanna models show a sharp “right skew”. This indicates that these indicies are quite sensitive to changes in implied volatility[IV], with lower (higher) implied IV to dealer buying (selling). This is a hallmark of “put-dominated” markets (ex of “call heavy” resistance vanna here). Again, as noted above, near term gamma inducing calls were moved to higher strikes.

On this point of IV, we see the VIX currently just under 20. We’ve been of the opinion that traders would not aggressively sell volatility until the FOMC (5/4) and/or some resolution on the geopolitical front. Coincidentally an “official” Russian default would take place on 5/4.

Regardless, 1 month realized vol in the S&P500 now lower at 16.17, which gives some breathing room for IV (i.e. VIX “fair value” is slightly lower). This may signal traders selling “pre-FOMC” vol and holding longer dated.

Our bottom line is this: Those of you who have been with us for a while now that our base case is bullish if markets are over the Vol Trigger (4450). Light, but supportive dealer flows appear over 4500, and if the VIX holds <20 then we have to respect odds for a leg higher.