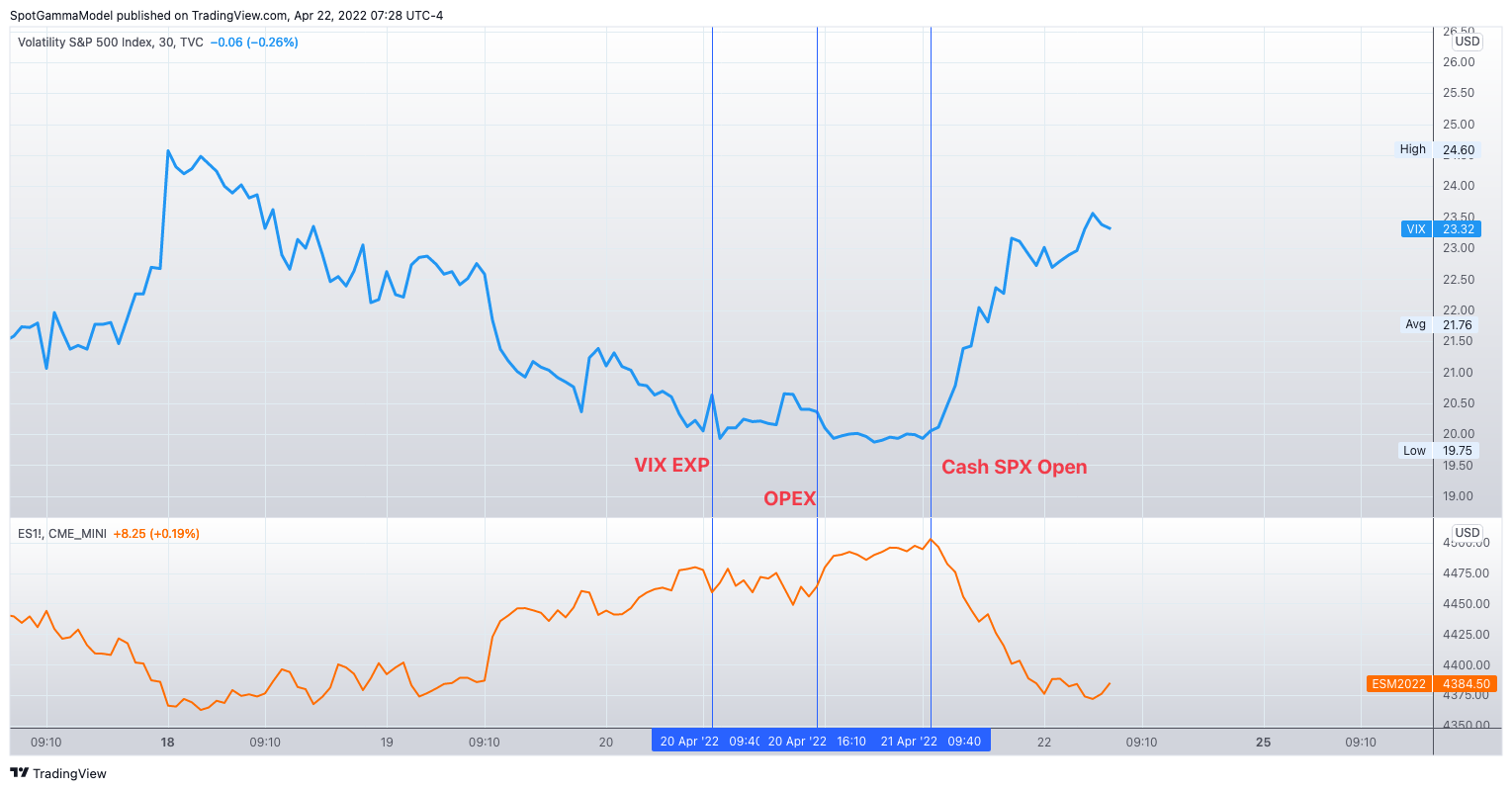 We see another large expiration for the S&P ~25% which can add to volatility.

There are many narratives being passed around in regards to yesterdays decline. The following paragraph(s) are intended to provide some retrospection in hopes that it helps guide markets going forward.

In our morning report on Wednesday, 4/20 we laid out how we thought VIX OPEX drove a very short dated squeeze, which was the catalyst for the rise. Additionally we noted an unusually large amount of gamma SPX/SPY/QQQ gamma (>20%) expiring on Wednesday night. To quote what we wrote on Wednesday AM:

Further, as per the S&P500 chart shown at the top, the market still exists in a void of sorts, particularly with the large SPX/SPY OPEX’s today (OPEX removes at-the-money positions). We see 4500 (SPX Call Wall) as significant overhead resistance, and also feel that a drop back into this “void” to 4400 can happen quickly.

Had we written the paragraph above yesterday, we’d opine that none of our members would be searching for further narrative. Truth be told, Wednesdays closing price action (ex: SPY/QQQ divergence) into Thursday AM left us scratching our heads. We certainly anticipated volatility on Thursday(our implied vol move was 1.2%), but we admittedly began to shift from “filling the downside void” to “two way volatility is possible”.

Historically we flag large options expirations for two reasons. First, in call heavy markets we usually get an expansion in volatility after expiration. It put heavy markets, many of you know that major lows come in the day following expiration (ex: Jan 24th, ’22, March ’20, Dec ’18 ). Wednesday expiration was certainly not a monster, but (as noted) it was unusually large for a mid-week “non event” day (ie no FOMC). The expiration served to clear out a sizable chunk of short dated positions from 445/4450-450/4500. Essentially, we think this OPEX “pinning” describes a lot of the price action Wednesday PM to Thursday AM.

All of the above is a verbose way of saying that we believe short dated options positioning in an illiquid market was the cause of this 100pt roundtrip in markets.

There were some Fed comments that certainly didn’t support markets, but the seemed to just reiterate what the market already knew: 50bps raise. Arguably the market was expecting this already as per the Fed Funds tool below, which shows that heading into yesterday that market already anticipated the increase.

Ultimately, this leaves us back to this “map” from Wednesday. 440SPY/4400SPX is the last “neutral” strike on the board, meaning it is the last strike with material call gamma. Below 4400 its primarily but gamma, which leaves the market exposed to dealer short-hedging.

As noted at the top, this is another large expiration for the S&P (SPX & SPY). We see roughly 25% of gamma expiring, and much of that is coincidentally centered around the 440/400 area (grey area, below). We therefore think the S&P more or less holds the 4400 area today, but with some wide swings.

Looking forward, into next week there is no reason we cannot see another “air gap” rally like we did this week. 4500 Would remain significant resistance. To the downside, we’re flagging the 4300 Put Wall as a major low into the key 5/4 time frame.

This is because of our “lower bound” concept, which may apply on a test of 4300. Shown here is our delta tilt indicator, which measures call delta vs put delta. When the indicator shows near the blue dashed line, it suggests the market is at “maximum put size” and that leads to a pause in market decline. We’re currently off of that blue line, but a move to 4300 likely places us back at that lower bound.