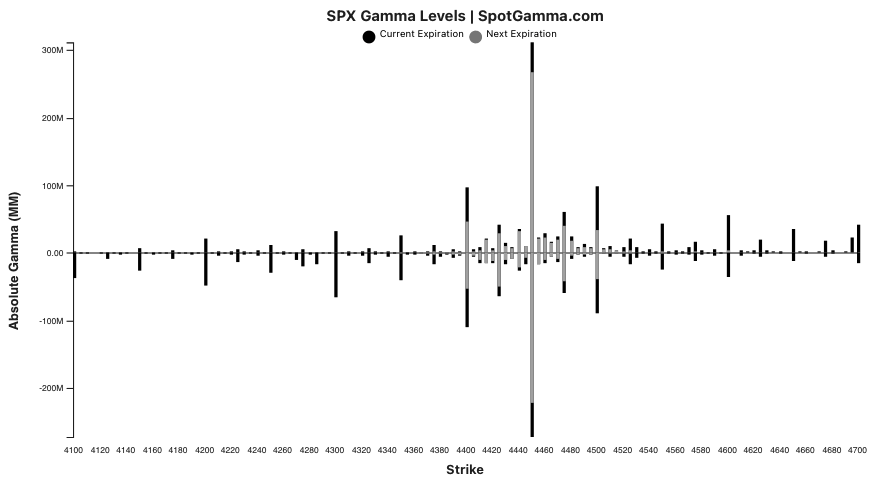 We still register ~25% of SPX/SPY/QQQ gamma rolling off today, ahead of the 3 day weekend. This is predominantly negative put gamma that is going away. In line with this (and as stated for the last several days) we thought that this put-heavy expiration into a long weekend would provide fuel for a market lift. With yesterdays 1% shift higher we think that fuel is largely burned up, and that 4450 is now “fair value”. As shown below its the dominant gamma-strike on the board – a large amount of which expires today.

Ultimately, we’re in “no mans land” at current levels. This expiration removes a fair amount of the put support. There is now no significant OPEX now until 5/20, and positioning is very neutral as per being at the gamma flip line (Vol Trigger 4435). This makes assigning an edge difficult.

Puts expiring does open the market to “lower lows” should selling pick up next week. Further, you may note that many of our key strikes have been shifting lower (Vol Trigger, Put Wall, Call Wall) all of which suggest the systematic rolling down of options positions. Traders have been monetizing puts, but have yet to position into upside calls.

As you can see below the gamma reduces with today’s expiration, and note the “kink” around 4400 that goes away. That is due to 440SPY/4400SPX puts being removed which leads to a reduced negative gamma position. Through another lens, you can see this as fewer put positions, and a market that has less hedges. If new puts are added, that foists negative delta hedging onto dealers (aka short futures, and downside pressure). Its likely puts would be added at lower strikes, so we’d have a new lower bound now at a lower strike, something like 4300 (vs 4400 this week), for example.

We must note that the S&P is technically above the Vol Trigger level (4435). Per our model this compels us to give an edge to the bullish side, however we expect this strike to shift into Monday. We’d likely want a recapture of the 4500 line to signals a true “risk on” position.