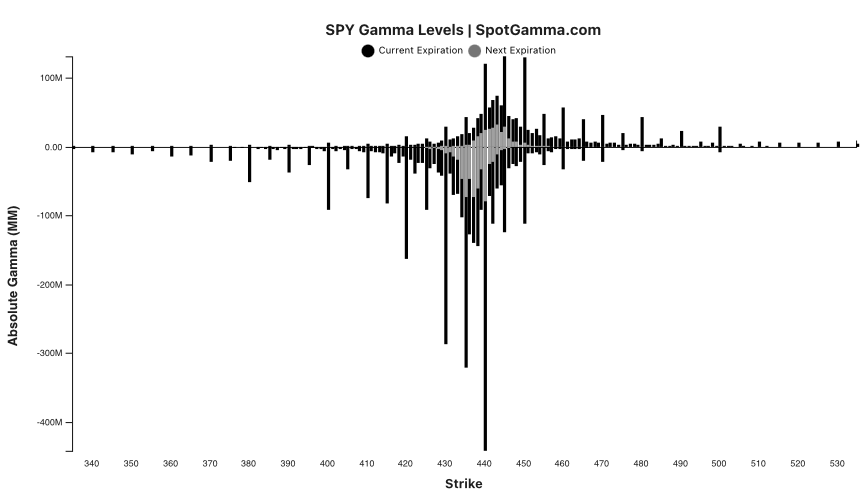 Futures have bounced back up toward 4420 (440 SPY). Our volatility estimate for today comes in higher vs yesterday at 1.54%. Further, there remains a heavy negative gamma position in both SPY & QQQ. 440SPY/4400SPX are the interim floors we are watching now as support. Resistance holds at the 4450 line.

Yesterdays flow was quite interesting. We saw another 20k each of puts & calls added to 4450 and over 445k puts trading at the 440 SPY strike. Despite this very large volume, open interest at the 440 put line went down 3k!

Generally you’d expect a large change in open interest when there is such large volume, and because this didn’t happen it suggests either “day trading” or the closing of large positions. Here it may have been traded vs another fund (instead of dealer or MM), as if it was a large fund closing out vs a dealer we’d have likely seen open interest decline sharply.

Regardless, 440SPY remains the main feature of the S&P500 layout, as seen below.

We now face back-to-back expirations for the S&P and QQQ wherein ~40-50% of total SPX/SPY/QQQ gamma expires (~20% per exp). This is put-heavy gamma that is expiring, and in the short term (i.e. this weeks) supportive of markets due to the related vanna/charm flows. Stated simply: puts are expiring and dealers can likely buy back some futures.

As you can see IV is elevated from earlier this month wherein the SPX tested 4600 (and then Brainard’s hawkish comments dropped stocks). We think (despite her notes again yesterday) that traders are not going to want to carry many short dated puts over these next few days and into the long weekend. Therefore very short dated IV will likely come for sale (plus the back to back expirations). This is the vanna component.

This gives us a bullish edge into tomorrows monthly OPEX, and we think that this put interest removal takes away some of the market support for next week.