Futures are on 4400 after a quiet overnight session.  There are a cluster of large combo strikes around 4425 which we view as the top for today. SPY notional gamma is roughly 3x that of SPX, and so Call Wall gamma resistance is more of a “band” in between 4400 SPX and ~4415 (440 SPY equivalent). To the downside we see 4375 as support.

We anticipate implied volatility to slowly wind down now, and that should add a tailwind for equities. Its likely that the Call Wall shifts to 4450 or 4500 into August OPEX which is still 4 weeks out.  We remain of the view the that market is well hedged due to Jackson Hole.  As mentioned last night September is the  largest gamma expiration for SPX, which is a bit unusual given how far out that expiration is. Holding Sep puts not only hedges traders for Jackson Hole, but its also the quarterly OPEX which most large institutions use for hedges.

Our Risk Reversal metric is also at 8 which indicates puts hold higher prices relative to calls – 5 is generally what we see with markets at all time highs. Therefore one could take the view that there is some volatility premium which can still come out.

As we’ve touched on often the “volatility of volatility” has been extremely high, with each drawdown being a violent drop which is met with a reflexive move to immediately short volatility. As shown in the chart from BofA below (h/t ZH) not only is this “vol of vol” is real, there are a lot of “shocks”. Its been made clear that the Fed Put remains in place, and we therefore don’t see a change in this vol-of-vol dynamic. 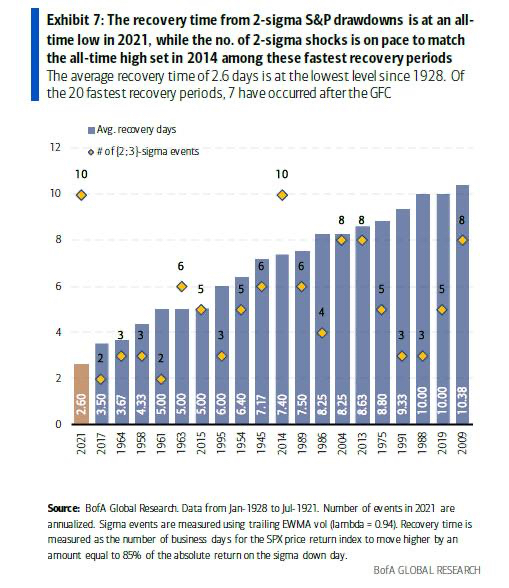 As we approach Sep OPEX this snap-back response to selloffs could change due to the large Sep puts.  We could see a drawdown hold a bit longer as those Sep puts are less likely to be closed or rolled in the event of a large move lower.